Our trip to the ER

When you have a child with allergies you always wonder not if but when the first slip up will happen...

As I prepared spaghetti for Harper's tea I read every ingredient list of every product, I always do, as I came to the beef stock I read natural vegetable flavours, I had a long hard think I was sure I had used this stock before, not sure enough.

Over the next few hours the stock crossed my mind more than once.

I placed Harper's dinner on the highchair so he could feed himself as I told Matt, I was unsure of the stock and to keep an eye of him for the evening as I was heading out.

After a few minuets Harper started to crying and pulling at his clothes, at first I thought he was upset because he just wanted to get out of the highchair but as the screams got worse I knew something was wrong.

I took him out and undressed him, he was clawing at his skin in a way I've never seen. As I looked over his body I saw a rash covering his entire back there were spots on his legs, chest and shoulders.

I've always wondered when this day came how I would react, weather I could keep it together...


Without a word to Matt I walked straight to the phone and dialled 000, I then went to our cupboard to get the Epi-Pen ready. The lady on the phone keep asking about his breathing and talking me through what was happening, She repeated several times "the ambulance is on its way"

It only took about 10 minutes to arrive, (I later found out they were on there way to a call out at a suburb near ours but were diverted to us)  while we waited for them to arrive I had gave the phone to Matt and went to pack a few things for Harper.

When they came in Harper was afraid, I think it was the uniforms. They had to attach sensors to his back to monitor his heart rate and he was so scared.

Relief rushed though me as they stated his heart was looking good, it had not developed into anaphylaxis but they wanted to take him there in case of delayed reaction.

Once in the ambulance Harper was no longer afraid he was excited, I was strapped to the bed with him on top of me, there were so many things to look at he screamed CAR with such pleasure.

As they wheeled us into the Royal Children's Hospital, a doctor walked past with flushed red eyes she looked like she had been crying, another doctor then came to tell the paramedics there had been two massive trauma's brought in she repeated massive, I felt sick it's such a terrible place to be.

once taken to a room several doctors and nurses came to see us and monitor Harper over the next 2 1/2 hours, it was pretty horrible, he was so over tired they had to keep holding his noes so he would open his mouth and they could check his airways.

This time we were super lucky, but allergy's build up and the next slip up could be much worse. They told us we were lucky potato was the only thing he had been exposed to and that it was such a small amount, if it had have been nuts, egg or milk the reaction would most likely have been far worse.

I can't help but to feel guilty I should never have used that stock cube, I should have trusted that nagging voice in my mind that keep going back to the stock, I also feel lucky that this has made me pick up my gain even more and now if there is the slightest doubt or feeling I wont be feeding it to Harper.

Last night after I got him to sleep I checked his breathing so many times I lost count, I felt like a mother with a newborn the fear came back all over again.

Today I wake up feeling so blessed to have such a wonderful beautiful boy. 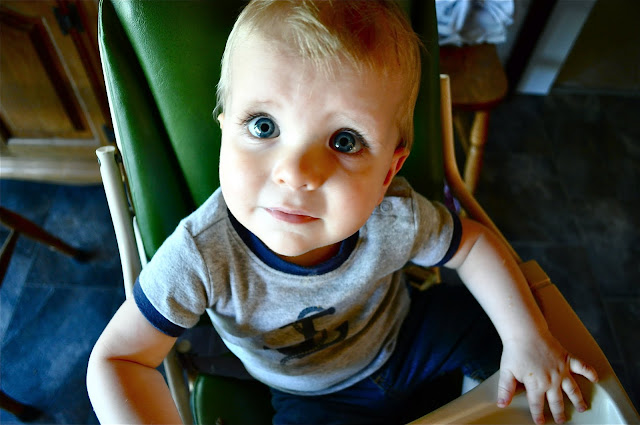 I'm sorry I know this is an old photo, My grandma has been really sick this week and I haven't been home much to take any photos.