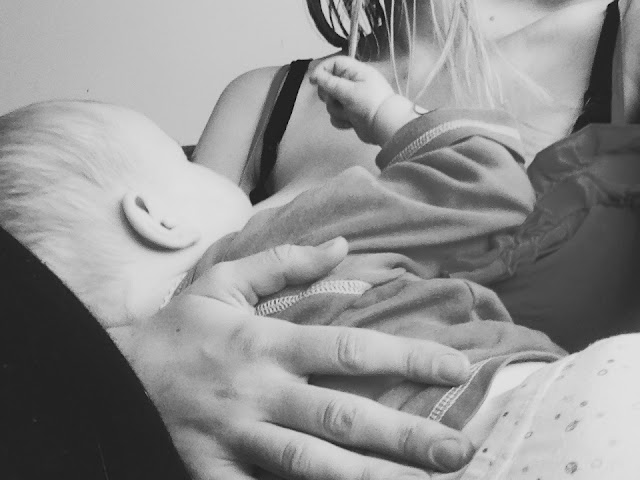 While pregnant I was taught about breast feeding, It was described as an "intimate and pleasurable moment between a mother and child"

I remember thinking that was kind of weird, I didn't really understand what they meant by "intimate and pleasurable"

Knowing breast feeding was best for both of us, If possible I wanted to breast feed, I was determined to give it my best shot.

When I think back to the beginning of our breast feeding journey the First thing that comes to mind was the incredibly sore chapped nipples, and I remember waiting, I waited around for this so called milk to be able to feed my hungry baby, on the Fourth day I woke up with breasts bigger and harder that I realised possible. At last my milk arrived.

At first I found it anything but natural, feeding a baby was much harder that I had anticipated, there was so much to think about, The position, Was he latched on properly? Could I see him swallowing? While all the time trying to relax to be sure I would have a let down. When I first experienced the let down it came with painful cramps that brought back memories of a labor I'd rather forget.

After a week or so things began to fall into place, I started to feel like I had some idea of what to do. Over the next couple of weeks We learnt what to do together, we did skin on skin, we stared at each other, we got up every 2 hours to feed.

As we bonded I found I enjoyed breast feeding more and more.

When Harper was three weeks old I got my first case of sever infective mastitis, I developed an abscess and had to have it aspirated. I wondered when the pain of child bearing would ever end. Around this time Harper began to develop eczema, it started on his cheeks and began to spread over his body. At around 4 month's Harper's weight gain started to drop, followed by sever constipation. I knew something wasn't right.

We saw a doctor who taught us how best to deal with eczema and were given strong cortisone creams. I followed every order that doctor had given us and there was a lot, After a couple of months of using cortisone twice daily only to have the eczema re-appear the next day I started to worry about the damage of the long term use of the creams. I called a naturopath and made an another appointment with the doctor.

It was then they decided to do allergy testing, at last we had our answer. Harper was allergic to milk, Egg, Potato, Nuts and had a FPIES allergy to rolled oats. I felt so relieved to finally know what was wrong, I also felt devastated it was what I had been eating this whole time that was making Harper sick.

My goal was to BF until Harper was a year old, I've been slowly introducing formula bottles into our days, when Christmas Day came I decided I wanted a day off. Today I wanted to be selfish, to eat what I wanted and to have more that one glass of wine, so I skipped my morning feed and again the next day and then again. It seemed easy and Harper was unfazed.

On the Fourth day thoughts raced though my mind, had I just weaned my baby? I hadn't really planned it, it just happened, Harper took to it so well he just seemed ready. I wounded if it was me who wasn't? I awoke on the fifth day, in a moment of panic I decided I would offer one last feed I wanted to smell his hair, stroke his face, breath him in. I wanted to remember that last feed. As I brought Harper close he arched his back and pulled away screaming, a lump formed in my throat as I realised at that moment it was already over, I knew he was ready and in a few short days he had moved on.

Over the next few days I slowly moved on. I loved having more independence and being able to eat anything but I also missed that special time we shared. I feel this is one of the biggest milestones we have crossed.

I've loved breast feeding my baby more than I ever imaged, it's been an amazingly rewarding experience one that I will miss and look forward to sharing with another baby, I'm so glad I got the chance to breast feed and was able.

Now I know what they meant by intimate and pleasurable, I have felt both.

I won't deny feeding has posed challenges and some days I would have preferred to give my baby a bottle in a mall instead of sitting in a smelly baby change room but for me the pros have far outweighed the cons.