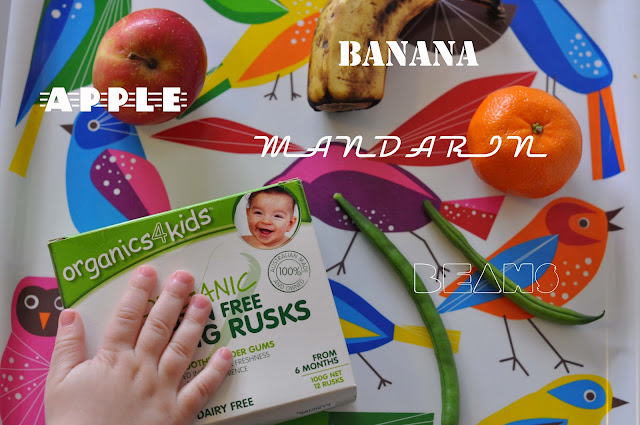 Apple: cut into quarters, peel left on. I steamed it in the microwave first. (Chocking risk) She loved the flavour of apple, but I found even steamed it broke off in chunks. Next time I'll be trying grated.
Beans: steamed, she enjoyed sucking these but didn't manage to eat any.
Mandarin: I removed the seeds and gave her a slice, she enjoyed sucking it and manage to break it in half after moving it around in her mouth it fell out.
Broccoli: steamed, it was easy for her to hold and she managed to swallow some.
Banana: given peeled with groves cut out for holding.
Teething rusks: major hit, she loves them & it gives her practice at getting food to her mouth.
Finger of toast: left to cool down so it goes hard, given Un-butted.
Carrot: cut in half and roasted.
Grape puree: put onto highchair tray, she loved putting her fingers in and licking them clean.

I'm amazed at how quickly Charlie is learning to find ways of getting the food herself. Nappy changes have proved she has managed to eat banana and broccoli. Bibs are hard, they get in the way and Charlie ends up trying to eat the bib, so for now we're not using one. I'm using the Bumbo seat with the attached tray as a highchair, We tried the big highchair but she just slips down. I was going to test run cows milk this week, but I lost my nerve. I try to stay calm, but after what i've been though with Harper introducing foods is proving to be incredibly stressful. Although Charlie is not yet sharing our meals I'm slowly cutting salt out of our diet, giving us a chance to get use to it, if needed we can season our food on the plate.