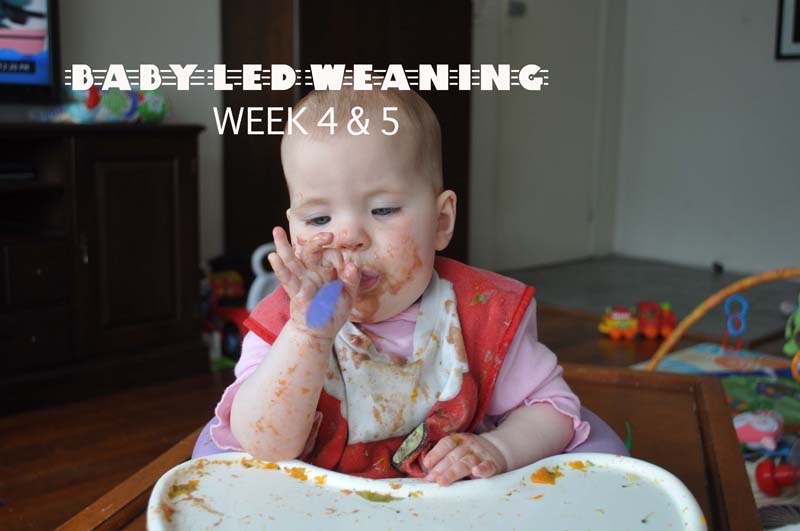 Last week I tried doing pre loaded spoons, I was shocked at how easily Charlie found her mouth with the spoon, first go, bam, straight into her mouth. It is super crazy messy, but Charlie enjoys it so every couple of days we do a few pre loaded spoons, normally consisting of store brought pre-made organic baby fruit.

Orange: slices, mostly she sucks the juice then spits out the orange.
Strawberry: given whole, managed well.
Watermelon: cut into large triangles, black seeds removed.
Mandarin: seeds removed.
Chicken: drumstick, I have found the softer more moist leg meat is far easier for a baby to manage. In saying that I first gave Charlie a really large slice to try to avoid her swallowing it whole, but she did anyway, guys she didn't even gag. Just swallowed that slippery meat down ha ha. My mummy fears got the better of me and from then on I gave her smaller slices, she really enjoyed it.
Bread: every morning Charlie has bread toasted, I top it with topping such as, mashed banana, sweet potato, pumpkin, avocado, carrot. If I'm in a hurry and can't deal with a messy meal she eats it dry.
Beef: from a slow cooked casserole, this girl likes meat.
Avocado: sliced rolled in corn crumbs, the corn crumbs make it far more manageable, not as slippery.
I have continued with foods iv'e mentioned before such as carrots or Charlie favourite broccoli, which is always a winner but makes my house smell, in a bad way.

At 7 months and one week, I'm still giving breakfast each morning. As soon as we get up, she eats in the bumbo seat, I then change all her clothes, nappy, and wash her with a face washer. This has been the easiest way for me to deal with the mess. Somedays she still needs a bath. I must admit the mess is still hard to handle, I'm hanging out for summer so I can sit her in a nappy on a towel, take her outside and hose her down.
As soon as her clothes are off I rinse and spray them before starting a wash right away, this mostly avoids the stains.

I have been trying hard to give a 2nd meal since she turned 7 months, it might just be a crust off my sandwich at lunch or a strawberry. To be honest it probably only happens every 2nd day but I'm working on this.

I let Charlie have a sip of water, straight out of my glass but plan to keep this to only once or twice a week. When we decide to increase the water Charlie drinks I've read about how well a baby does with a shot glass, so I'll be trying that.